Reexamining the value of sleep: The argument for later school start times

Last school year, I studied the role sleep plays in the lives of students for my Junior Research Paper (JRP). As a part of the project, I sent out a survey about sleep habits to all Upper Division (UD) students and received 300 responses. I found that 91% of students in the UD get insufficient sleep (fewer than eight hours) each night — up from the national average of 73%. The results also indicated that roughly 45% of students are unable to get a full eight hours of sleep each night because of how early they have to wake up to leave for school in the morning and because the earliest time most adolescents can biologically go to bed is 11 pm. In addition to reducing how much homework is assigned each night, we need to implement a later school start time to provide students the opportunity to sleep a healthy amount each night.

Experts widely agree that the less you sleep throughout your life, the shorter your life will be. A study published in Psychosomatic Medicine found strong correlations between the amount of sleep one gets and the amount of natural killer cells (cells that fight off tumors, diseases, and viruses) in one’s body. When participants’ sleep was reduced to four hours for just one night, their natural killer cell activity dropped by over 70%. One’s risk of developing various forms of cancer are all heightened by sleep deprivation. Since 2007, the World Health Organization has considered nighttime shift work to be a likely carcinogen due to its effects on one’s circadian rhythm, according to “Science Daily.”

Along with upholding our immune system, sleep maintains our DNA and gene activity. In one sleep study published in 2013 by the National Academy of Sciences, after a week of sleeping six hours each night, participants had 711 genes which demonstrated altered activity — half were increased in their activity and half were decreased. The half that decreased in activity were genes responsible for a properly functioning immune system and the half that increased in activity were genes linked with the development of inflammation, cardiovascular diseases, and tumors.

But perhaps what’s more significant to students in particular is that sleep is also necessary to sustain basic mental functions like memory and learning throughout the day. Sleep is crucial both before and after learning, as it ensures that the skills and memories absorbed throughout the day are retained long term, and that short-term memory space is opened up for new memories to be created the following day. In a study published in “Nature Neuroscience” in 2007, without having slept at all the night before, participants demonstrated a 40% decrease in their ability to form new memories the following day compared to participants who got a full eight hours of sleep the night before. If students were tested on material they learned in school on a given day, those who got no sleep the night before would likely fail the test compared with those who got eight hours of sleep. I can certainly relate to this because I feel much more present and attentive on days when I am better-rested. But, how about those people who say that they can perform perfectly well on a mere four hours of sleep? According to sleep expert and neuroscience professor Dr. Matthew Walker, there is, in fact, a gene which grants some the ability to survive with only five hours of sleep each night. However, according to Walker, only a fraction of 1% of people have this gene, and you are more likely to be struck by lightning than to belong to this group. Sorry.

Furthermore, people actually get better at performing tasks as they sleep. According to Walker, during the REM (Rapid Eye Movement) stage of sleep, the brain replays, or practices, tasks it learned throughout the day at high speeds, improving its performance in those tasks. What’s more is that throughout this process, the brain specifically focuses on improving the most difficult parts of a task, according to Walker’s findings. His studies also corroborate previous evidence that the more one learns during the day, the more of this ‘practice’ their brain performs at night, suggesting that the more one is learning, the more they should be sleeping in order to solidify the extra information they learned. This correlation should be especially concerning at schools like Horace Mann, where students are notorious for getting insufficient amounts of sleep, as demonstrated by survey data.

At this point, you may be wondering whether it’s worth studying or doing homework at all if sleep is such a powerful tool for learning. Why not just go to sleep as soon as you get home? To begin addressing that idea, it’s important to acknowledge that the benefits that sleep offers are finite. Once you sleep a certain amount, the benefits of sleep will be fully realized; sleeping more that night will not provide any additional advantage. However, in terms of valuing sleeping time over studying time, a study published in 2013 by the Society for Research in Child Development found that as soon as students sacrificed getting a full eight hours of sleep for doing schoolwork (or anything else, for that matter), they had a harder time grasping new concepts and completing assignments in school the next day. This finding challenges our society’s entire conception of the value placed on homework, especially in comparison to how much our society values sleep. At HM, I hear students every day complaining about how late they had to stay up to finish an assignment, and we’ve likely all experienced this ourselves. The results of the study discussed above indicate that getting a full night’s sleep is actually more important for one’s education than doing a full night of homework.

There are a number of ways to address the problem of sleep deprivation in schools, but the two most practical and effective are to reduce homework amounts to allow for earlier bedtimes and implement later school start times. Because homework is so different from school to school, student to student, and day to day, it is difficult to empirically test its effects on student sleep durations, and in my research I have not found much data or experimentation testing the effects of varying amounts of homework on students’ sleep times. However, from the UD data I collected last spring, I do know that 72% of students feel they would go to bed earlier if they had less homework, and that 69% of students feel that homework is the most important factor in determining how much sleep they get on weeknights.

In terms of implementing later school start times, there is much more data to work with, and the effects are much clearer. In schools that have implemented later start times, results have included higher attendance rates, better grades, longer attention spans, fewer feelings of depression, and significantly longer sleeping hours, according to research published by the American Academy of Pediatrics in 2014.

At the moment, many school schedules start too early to align with the natural hours during which adolescents sleep. On top of that, adolescents today have a hard time falling asleep before 11 pm, meaning students’ waking times are determined by their school and their earliest bedtime is determined by their biology. What if there isn’t enough time to sleep between 11 pm and the established wake-up time? Unfortunately, that is the case for about half of Horace Mann students in the UD. 45% of students do not have an eight hour window between 11 pm and when they have to wake up to go to school. Quite simply, regardless of the amount of homework or other activities they engage in, nearly half the student population is not even given the opportunity to get the minimum healthy amount of sleep each night.

Unfortunately, it is widely agreed upon that the later parts of nightly sleep are also the hours during which the most REM sleep occurs. Since REM sleep is the stage of sleep which provides the most learning benefits, starting school days earlier specifically cuts off the most educationally beneficial part of sleep.

The effects of additional morning sleep on academic performance are clear. In a 2011 study published by the American Economic Journal, Air Force Academy students who began classes after 8 am had a 15% increase in the standard deviation of all their course grades compared with those who began class before 8 am. In a 2014 study published by the University of Minnesota of six different high schools in three different states, five of them exhibited significant grade-point average improvements in math, English, the sciences, and social studies, after implementing a later school start time. In one study published in 2010 by the Social Science Research Network, reading test scores of middle school students in North Carolina increased by a standard deviation of 3%-10%, and math scores increased by a standard deviation of 6%-9% after pushing the school start time back by one hour. Outcomes also include fewer car accidents, fewer tardy arrivals, lower amounts of depression, happier teachers, and so much more in response to additional sleep. Significant improvements in academic performance (among many other things) await us if we seize the opportunity to let students sleep longer into the morning by implementing a later school start time.

As I researched sleep in schools like HM for my JRP, I was interested in hearing Dr. Kelly’s thoughts on this issue. In an email, he responded saying that he has, in fact, considered pushing the school start time to a later time, but that “a later start time for everyone (N-12) creates issues with busing, traffic, and how support staff are utilized in a school district or independent school, and it also dramatically alters what can be done with athletics and other after school offerings.”

“Even if HM prevailed on implementing a later start time,” Kelly said, “we’d need to have the schools we compete against do the same thing in order for us to continue to offer the full range of programming.” As someone who is not the slightest involved with Horace Mann’s large logistical complexities such as these, I cannot make a final judgment as to what would be best for our school. However, I will argue that while we may be able to offer a wider range of programming with the current school start time, 91% of the student body cannot fully take advantage of that programming because they are sleep deprived. Quite simply, a student, athlete, artist, or human being who is sleep deprived is not able to fully engage in the activities they are partaking in, whatever those activities may be.

*Read the full version of Hess’ article in the Special Features section of the next edition of the Spectrum. 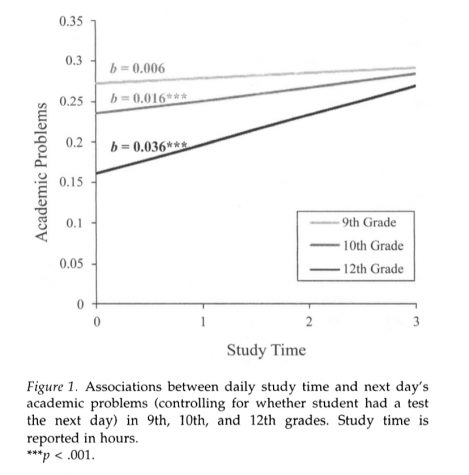 This is a graphic from the study weighing whether it’s better to study or sleep. It shows an increase in study time positively correlated with an increase in academic problems, which the researchers attribute to increasing study times causing decreasing sleeping times.