One year since Jan. 6: the path forward 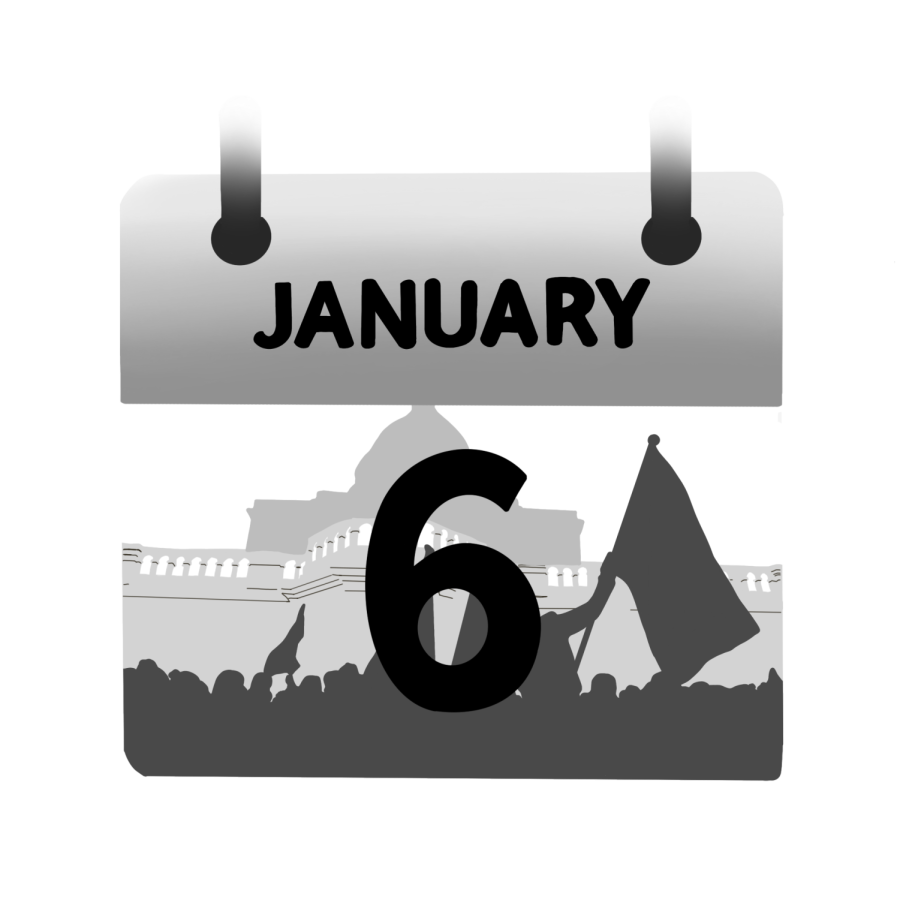 Yesterday marked one year since insurrectionists stormed the US capitol to overturn the 2020 presidential election. How, and why, should we continue to think about the gravity of what happened on that day and over the 12 months that followed?

Last January 6, I tried to make sense of the event with a mess of open tabs, glued to my phone as news feeds updated by the minute — gallows with a noose hung over the U.S. Capitol Building, Congress members barricaded themselves in their offices, people scaled walls and smashed windows, pistols were drawn, and red, white, and blue billowed. But by the next day, I had returned my attention to an upcoming chemistry test and Spanish quiz. By the following week, the insurrection was relegated to the past, a sore spot I didn’t press beyond the cursory glance at the news. My willful ignorance was a coping mechanism, a way to shield myself from the horror of the event at a time when I had no way to wrap my head around it. Like the rest of the school and country, I let the insurrection slip from my consciousness and conversations.

Pundits and politicians cushioned the horror by declaring January 6 “un-American.” That narrative was false. Many insurrectionists were motivated to act as “patriots” by the Great Replacement theory, the idea that Black and brown people will soon overtake and gain more rights than white people. While a group in power trying to preserve their spot at the top of our racist hierarchy is a playbook that America has cycled through for centuries, knowing that did nothing to ease my shock and terror. Confronted with such stark extremism and hyperpolarization, my reaction was to shove the entire incident to the back of my mind. I used apathy to ward off the gut-turning realization that over twenty million Americans were neck-deep in a rabbit-hole of election fraud conspiracy theories, willing to wield violence to restore a white supremacist to power.

My avoidance strategy worked until this week — it’s hard to ignore headlines like “January 6 Was Practice” (The Atlantic) and “Every Day is Jan. 6 Now” (New York Times). The two articles, among countless others, sound the alarm on the widespread, organized, and ongoing fight to erode democracy — one that we, as a school and as individuals, must confront. There is a middle ground between fear-mongering and ignorance, a place where we can look at our country’s past, present, and future with steady-handed understanding. That’s where we must stand if we are to face the 2022 midterm and 2024 presidential elections, and that’s where each one of us has a part to play.

The first step is to rid ourselves of the assumption that those who stormed the Capitol are an isolated mob of extremists. It is easy to see people from that day, like the “QAnon shaman” decked in ox horns over a red-white-blue striped face, and dismiss them as farcical clowns, especially in a blue state like New York where such views are undoubtedly in the minority. But a poll released by the University of Chicago last September found that 20 percent of American adults believe Joe Biden stole the election from Donald Trump — that is over 47 million people. The insurgents were not societal outcasts, as many believe to be the case. They were mostly middle-aged, middle-class white people. Though untied to known extremist groups, they still took extremist action, signaling the shift of radical right-wing ideologies into the mainstream.

Our second misconception is that the worst of the insurrection is over. In reality, the armed attack has evolved into concerted local efforts by “Stop the Steal” proponents to ensure future elections turn out in their favor. ProPublica reported on Steve Bannon’s “precinct strategy” that calls on far-right individuals to enlist as precinct officers and take charge of elections from the ground up. The collective influence of 8,500 new Republican precinct workers in 65 key counties by September last year (there was no such rise in Democrats) grants them the power to push elections in their favor. The New York Times also reported on Republican efforts to seize control on the state level, wresting the power to oversee elections from Democratic or non/bi-partisan hands to prevent another “stolen” election. These avenues are all lawful. They could be argued as evidence of people taking part in a democracy, but their motivations are undeniably anti-democratic.

Most of us are not of voting age, and it seems like our power to affect what feels like an immutable national force is minimal. However, in the face of such rampant historical revisionism, there is great power in separating truth from falsehood. We have an obligation to keep watching as the anti-democratic movement continues and the House committee on January 6 reveals more behind their conspiracy. Don’t doomscroll until you fall into a constant state of panic — been there, done that — it’s useless. Information is out there from all the sources I mentioned, plus many more. Dedicate a few hours to find answers and form your own opinions. Then, and I know this is a lot to ask, use your knowledge to take action. Write to members of Congress, Democrat and Republican, and demand that they make bipartisan pro-democracy a priority.

If nothing else, answer this: what does democracy mean to you as an individual? Why does it matter that Republican forces are eroding it? Because it does matter, and by the time 2024 comes, it might be too late to salvage it.