Those who don’t get the applause: Behind the scenes with stage crew 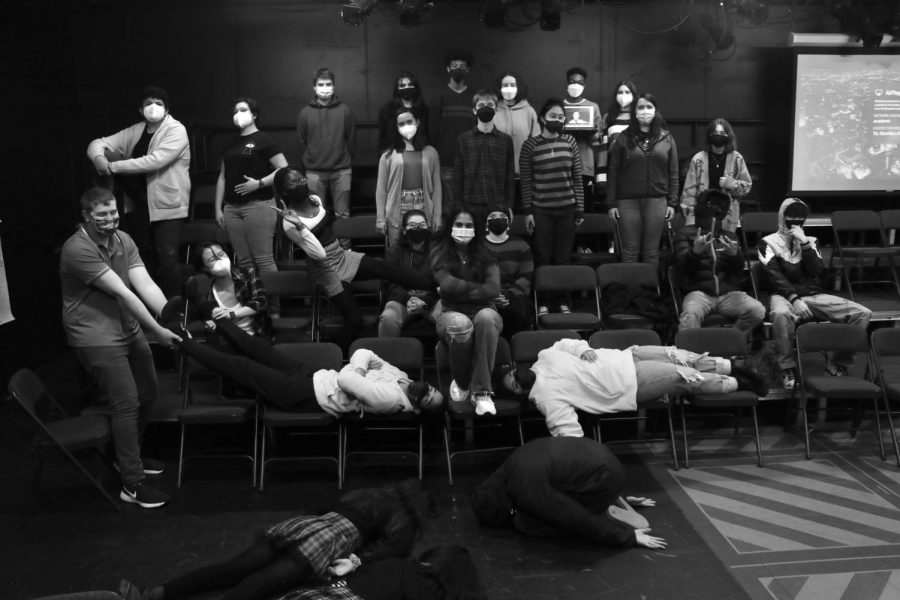 Every Tuesday and Thursday, eager students descend into the basement of Tillinghast to the scene shop for a stage crew meeting. The tight-knit group of the Horace Mann Stage Crew share their love of theater production and design by helping create shows for the Horace Mann Theatre Company (HMTC), Student Technical Director (STD) Bailey Hecht (11) said. The crew designs, builds, and paints the sets, while also working lights and sound backstage at all of the Upper Division (UD) and Middle Division (MD) theatre productions and assemblies.

The scene shop is a large room lined with tools and wood planks with large tables in the center for Technical Director and Design Teacher Caitie Miller’s classes, advisory, and stage crew to gather around. Set pieces are always moving in and out of the room, being assembled and painted before being taken up the elevator to Gross Theater, until all the sets are ultimately taken back to the shop to be disassembled.

AJ Walker (12) and Hecht are the Co-Student Technical Directors (STDs) of the stage crew for this school year. Hecht and Walker lead the group by taking attendance, delegating tasks, leading small working groups, and building a strong community, Hecht said. She joined stage crew in her freshman year and has always looked up to the STDs, so they are very excited to have that role for new stage crew members.

When students arrive to afterschool stage crew, they greet their friends and spend a few minutes talking about anything from their Hogwarts Houses to ideas for research paper topics before splitting into groups for their daily tasks, Hecht said.

Last Tuesday, Walker began the meeting by pointing at random members of the crew and enthusiastically interrogating them about their day, sending everyone into fits of laughter. “Of course, we all trust each other for safety reasons but also can joke around at the same time,” Hecht said.

Since everyone in stage crew has a common goal, the environment is very welcoming, stage crew member Jennifer Feng (12) said. During every meeting, the STDs delegate tasks to small groups that work closely to complete their jobs. Stage crew member Matthew Aponte (12) worked on stage crew in the fall semesters of both his freshmen and sophomore years and now is back for his senior year. “A lot of the reason we do stuff together is safety but honestly, it’s just more fun with your friends,” he said.

“A lot of the things we do in stage crew we can’t do without each other,” stage crew member Juliet Burgess (10) said. “It requires teamwork.” When taking apart the set from the recent Middle Division musical production Singin’ in the Rain Jr, stage crew members teamed up to carry around pieces of wood and platforms while others unscrewed them and put away props, she said.

In addition to working together, students also take on a variety of jobs for each show. Stella Shah (12), who designed lights for this year’s MD production, Singin’ in the Rain Jr, and the recent UD production of A. R. Gurney’s The Dining Room, is now taking on the role of set designer for the student-written One Act Play Festival.

Hecht has also taken on multiple jobs, having stage managed for last year’s MD production of Our Town by Thornton Wilder and running curtains for Singin’ in the Rain Jr. “I’ve really learned about what goes into the show from start to finish,” Hecht said.

Many stage crew members also perform in the HMTC. “Stage crew has helped me as an actor because I know about the ins and outs of what I’m doing,” Aponte said.

Miller actively encourages HMTC actors to join stage crew. Working backstage enhances the onstage experience for actors immensely, she said. “It is easy for people onstage to forget about the work that happens when they’re not there,” she said. “It’s important for them to value and respect those who don’t get the applause.”

Burgess has learned many important skills from her hours in the scene shop, she said. Members get hands-on experience with new tools they never had access to or had no idea existed in the first place.

“I really like working with my hands and I love how hands-on stage crew is,” Feng said. “It’s satisfying to have a final product that you cut and assembled by yourself.”

Along with after-school stage crew, Miller teaches an H period stage crew section. Burgess, who is in both groups, finds that the class and club are very different environments but enjoys her time in both, she said. “H period is more of a class setting while afterschool feels more like hanging out with my friends and being productive at the same time,” The H period crew often starts projects that the after school crew continues when they arrive a few minutes later, Miller said.

Students find a community in stage crew and have memories they will cherish long after their time at HM, Hecht said. “It was the first activity I joined my freshman year and now it’s my happy place,” they said. Some of her favorite memories include the small inside jokes between stage crew members and long Saturday rehearsals when students take time out of their busy weekends to pitch in and help.

Aponte also has many joyous memories from his time in stage crew. For example, the time Dylan Chin ‘20 wrote his name on every piece of wood he could find so for the next year, whenever the stage crew had to build something, they could find his signature.

The stage crew celebrates their hard work on shows by hanging out after closing performances and participating in fun stage crew rituals, Burgess said. “One time, when we had finished up all our work for the whole school year, we even had a huge karaoke party in the shop,” Aponte said.