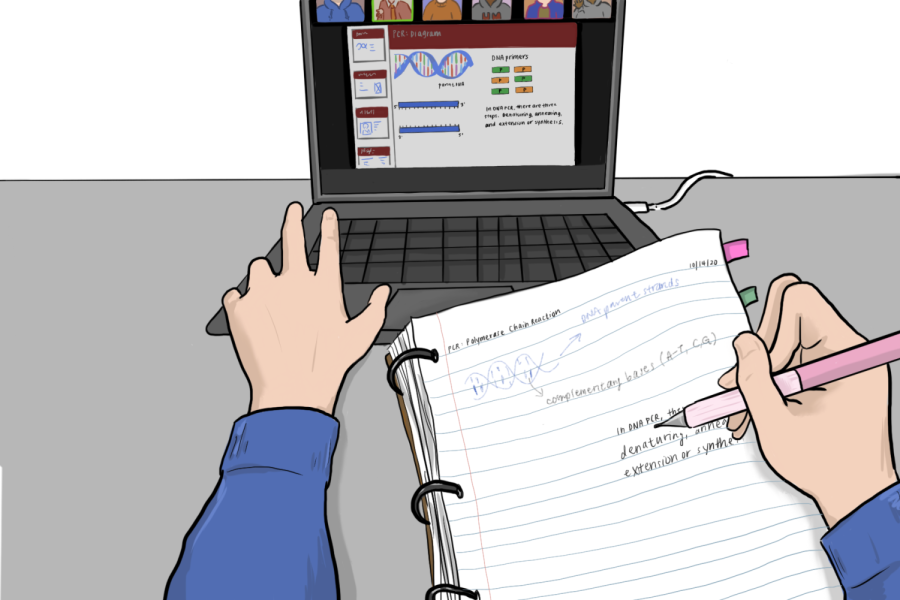 “Online school is not great and it is not fun,” Rachel Kuhn (12) said. This week, after the school reinstated online schooling for symptomatic students, over 60 students are attending school remotely due to quarantining as a result of the rising number of COVID-19 cases, Head of Upper Division Dr. Jessica Levenstein said. 10% of students and faculty tested positive for COVID-19 preceding the return to school after Winter Break, according to an email sent by Head of School Dr. Tom Kelly on January 3rd. Kelly also wrote that the school would only return to fully online if 30% of the school had tested positive for COVID-19.

Not all students learning from home have contracted COVID-19, Levenstein said. “Allowing students to Zoom into class if they are exhibiting flu-like symptoms, even without a positive test, is intended to minimize the presence of potentially infectious students on campus,” she said. “Opening Zoom to these students is an effort to keep our community safe during the surge.” Students must stay at home for 10 days before returning to school, Levenstein said.

Upper Division Science teacher Dr. Christine Leo took this year’s return to online schooling as a moment to reflect on how she taught the previous year, she said. “While after last year I feel really comfortable conducting Zoom-in class, there was definitely a moment of adjusting and shifting back into that mode.”

Leo is using some of the techniques from her Zoom experience last year that she felt best served students, in spite of the difficulties that come with them. “I found that using an iPad to project notes on the board in Notability while using the classroom computer to Zoom everyone in was the best,” she said. “However, it requires a lot of time to set up, and it is difficult to manage as a teacher.”

Compared to hybrid efforts last year, Michelle Kim (11) does not feel there is a large difference this year, she said. “My experience has been better than expected, but things are slightly worse because there were more people there and teachers were a bit more skillful dealing with Zoom,” Kim said. “Since we sort of had half of the year without Zoom at all, they’re sort of just getting back to it.”

Patrick Stinebaugh’s (12) experience this year has been better than last spring when he was quarantined while the campus had begun reopening and restarting many programs that had been previously shut down due to COVID, he said. “Things were starting to happen on campus, the field was open, so I really felt like I was missing out,” he said. “Right now, while I’d still be in school, I don’t feel as stressed about missing out.”

While Sophie Dauer (11) has not felt that online school has significantly harmed her learning experience, the amount she learns still varies depending on the class, she said. “The only place where I’ve really felt a strain on my ability to learn is probably the math class, just because you really have to see the board and the Hudl cams make it slightly difficult to do that.”

Raydris Espacia (11), who was online for the majority of the 2020-2021 school year and has recently returned to being online, has found that being on Zoom is less engaging than being in a classroom. “I don’t have a quiet room to work in [at home], which makes it harder for me to focus during class time,” Espacia said. “I get so easily distracted by my surroundings, because it’s already hard to pay attention to class.”

Stinebaugh has also had trouble paying attention in class due to technological limitations, he said. “I’m not getting distracted by other things, but it’s harder to hear a lot of things that mics don’t pick up and you’re not as involved in the group discussion.”

Kim has had difficulty participating in music-based classes, such as Music Theory and Sinfonietta, where students are often required to participate physically with their instruments or with their auditory abilities, she said. However, in classes that are more discussion-based, such as English and history, participation has not been as difficult, Kim said.

To help her remain engaged in a class discussion, Kuhn’s history teacher positioned her in the middle of the Harkness table and moved her around, which helped her feel less isolated from the class, she said.

Along with the tiresome schedule, Espacia said that communication with teachers, which is easy to do in person, is limited for her when she is online, she said. “Communication is sometimes there, but I often get forgotten about [by teachers],” Espaica  said. “However, some of my teachers last year did make the effort to include me in class and make it feel like an in-person environment.”

Stinebaugh’s experience with teachers has been similar to last year during online school, he said. “Some teachers have difficulty with Zoom, some forget about it and start the Zoom ten minutes into the period, but I think that was true last year.”

However, Stinebaugh does not think about what his teachers are doing or what they could do better, he said. “I don’t really pin it on the teachers—this is not what they signed up for, and it’s just an unfortunate circumstance where they have to deal with the negatives of being online,” Stinebaugh said. “They’re doing their best to deal with it, and they obviously don’t want me to be online either.”

Kuhn strongly prefers learning in an in-person environment, she said. “I don’t think there are any benefits to Zoom learning—I feel like I do learn a lot better in class.”

Dauer has often felt isolated from the rest of her classmates on Zoom, she said. “It’s sad to see everyone together, especially since at Horace Mann, the classrooms are always pretty fun.”