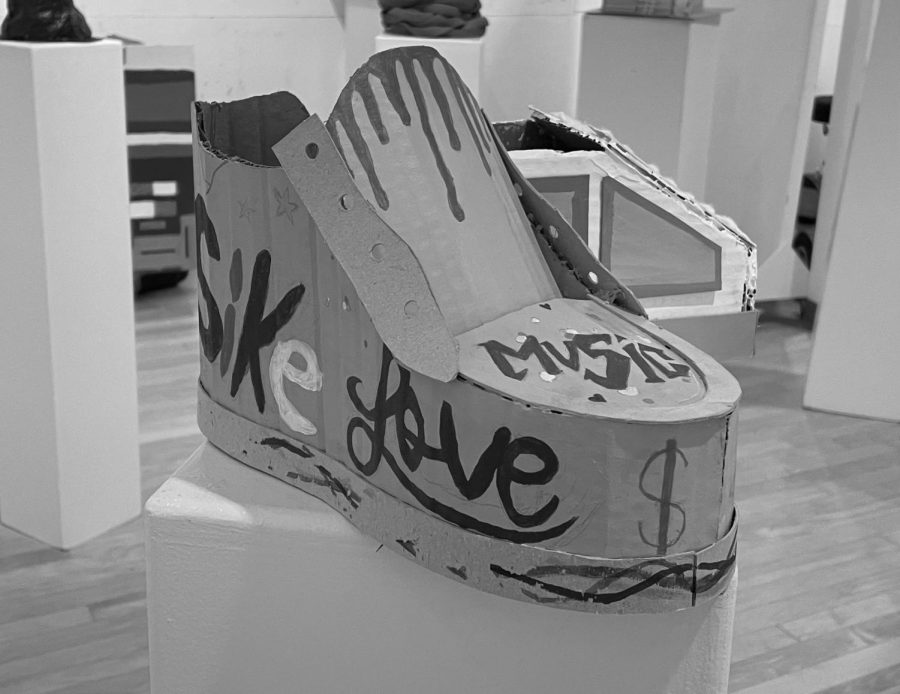 Pots, sculptures, and clay sculptures, placed on white displays around the Fisher Art gallery, are a few of the many pieces displayed in the new 3D Art Show. Curated by visual arts studio manager Emily Lombardo, visual arts teacher Keith Renner, and visual arts teacher Mirrie Choi, the exhibit features various projects made by students in sculpture and ceramics classes who selected pieces to feature in the show. The ceramics and sculpture 3D art show will run for two weeks until May 13th.

Throughout the year, Choi and Renner put aside students’ artwork to curate the gallery piece by piece, Lombardo said. Collecting work for the show was an extensive process. It took time to put the exhibit together and hang everything where it was supposed to be, Lombardo said.

“[The pieces in the gallery are] a bit of a snapshot of what was finished at this moment,” Renner said. The recent firing of several ceramics pieces allowed students to present their finished artwork to the school, offering the school insight into what is happening in the ceramics courses in the UD, Renner said.

To create their pieces, Sculpture 1 students experimented with size and scale for one project, as well as combined different animal skulls using plasticine clay for another. Students used media ranging from clay, papier mâché, and wire to create their projects. “As the sculpture classes get more advanced, they are able to take different techniques and different materials from projects they have already done to create their own sculptures, we increasingly use more mixed media as we go,” Choi said.

After creating a sculpture that depicted a mix of a chimpanzee and rabbit skull in Choi’s Sculpture 1 class, Sam Gordon (9) decided to submit his piece to the gallery, he said. They spent time working on their sculptures in class. “We started with base sketches and some research photos and then moved onto making wire structures and the base frame of the [projects], and then we started to carve the piece out of clay.”

Sculpture 3 student Trish Tran (11) chose to submit two pieces: one from their sophomore year and one from their junior year. One of their submissions to the gallery included a mask, which featured different expressions on each half, Tran said. “One half was gorey, and the other half is more animated and more emoji-like,” they said. “It basically represents seeing yourself in different prospects.”

Neither piece was inspired by anything in particular, Tran said. “It’s more so what my art style is and what I interpreted the process to be.”

Both pieces required more time and dedication than predicted, with the projects having been assigned in the beginning of the year, Tran said. “These projects ended up becoming much bigger than I anticipated, and it ended up taking me a full year to finish completely to the way I wanted it to look.”

For Gordon, one of the most memorable moments of his artistic process was accidentally breaking the piece, he said.“[I remember] when I dropped the jaw on the floor and it shattered so I had to make a new one.”

One of Choi’s favorite pieces displayed in the gallery was made by Aman Desai (10), she said. Desai’s piece featured a casting of a hand holding a phone with wires coming out of his fingertips, Choi said. “He really took the idea of using any medium and combined [the project]  seamlessly to convey his concept.”

The 3D Art Show is an incredible opportunity to showcase artwork for all students to see, Tran said. “A lot of students who don’t take studio arts classes don’t really get to see a lot of the sculptures or ceramics that are made, and I think kids seeing this art show will entice them to take an art class.”

Tran plans to take a full credit sculpture class in their senior year, hoping to skip a level of the class to take Directed Study, they said. Tran does not plan to focus on an overarching theme, but rather to continue to explore several mediums in sculpture, they said.

Unlike other galleries, the 3D Art Show features work from students in both the Middle and Upper Divisions, Lombardo said. “It reflects the Horace Mann community,” they said. “We are all showing the process of the students.”