All or nothing: Sports betting in the student body 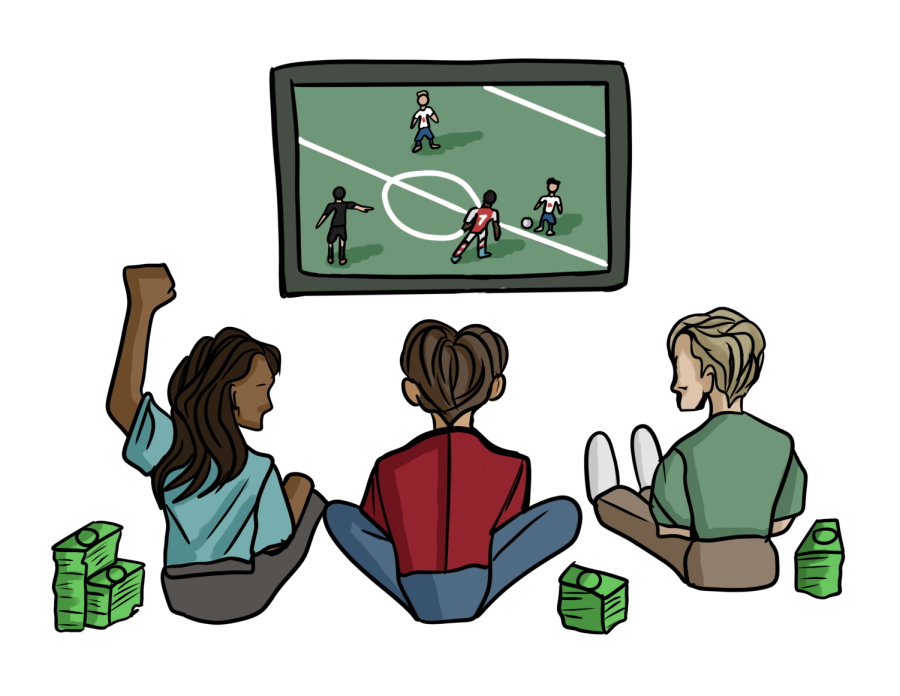 When Ryle* (12) — who requested anonymity to avoid seeming like he is flaunting his wealth — entered quarantine in March of 2020, he began to search for ways to entertain himself, he said. He found himself drawn to the thrill of online gambling games such as Blackjack and poker on roobet.com. However, he ended up losing more money than he was winning. In the summer of 2020, he transitioned to a form of gambling that he had a better shot at profiting from: sports betting.

Sports betting, one of the most common forms of gambling according to Statista.com, involves placing a wager or a monetary bet on the outcome of a sports game. The practice was legalized in various states after Murphy v. National Collegiate Athletic Association in 2018, in which the Supreme Court struck down a federal law that prohibited gambling on football, basketball, baseball, and other sports. In January, New York became the 18th state to legalize mobile sports betting for New Yorkers aged 18 and older.

According to The New York Times, New York became the top market for sports betting in the United States just a month after its legalization. As of February 2022, sports betting platforms like Caesars Sportsbook, DraftKings, FanDuel, Rush Street Interactive, Bally Bet, BetMGM, Wynn Interactive, PointsBet, and Resort World Bet had 1.2 million accounts based in New York, according to GeoComply Solutions.

All forms of betting and gambling are prohibited on school property, as stated on page 62 of the Family Handbook. “There is not much to say, the rules are very simple — there is no betting or gambling allowed on campus, period,” Upper Division Dean of Students Michael Dalo said. “Out of school, it is out of our purview to be monitoring what our students are doing off of our campus, but in general, we would never advise students to be betting or gambling.”

Tristan* (11), who requested anonymity to avoid judgment from the school, is not a frequent sports bettor, but has recently engaged in the activity online, he said. “I did [sports betting] mostly because I have spent a lot of time following the NFL in life, so I thought that this season, I had sufficient knowledge to not lose all of my money,” he said. “I basically went four straight weeks betting the money I won the previous week, I started with $50 and ended up with $900.”

Tristan used an online betting platform called DraftKings to place his bets. Because betting was not legal in New York when he engaged in the activity, Tristan used a virtual private network (VPN), which ensures internet privacy, to connect to Montana and bet, he said. Since he was underage, he lied about his age when he signed up on the website.

After Tristan won his bets, he transferred them to his debit card for everyday spending since he did not plan to splurge with his earnings, he said. The thrill of winning a bet is less about the money and more about the competitive aspect, he said. “Honestly, most of the fun from sports betting comes from lording my winnings over everyone else,” Tristan said. “When I went on my roll of betting correctly for four straight weeks, it was very fun to talk about it with friends and exhilarating to follow.”

Because Tristan does not participate in sports betting regularly, losing money has not presented a problem for him yet, he said. “When I first got into betting I told myself that if I won a lot of money I was going to stop at some point because I knew over the long run that I was not going to be able to break even with the sharks,” he said. “When I did luck into a substantial amount of money, I stopped betting outright and haven’t bet since.”

Although Ryle has been profitable overall, he does occasionally lose bets, resulting in significant monetary losses, he said. “I would 100 percent say it’s scarier for me when I have $500 on the line than when I have $5 on the line, just because there is that risk,” he said. “You definitely don’t feel good after losing a $500 bet — I’ve been there many times — but for me, with every loss, I know that there are multiple wins coming, so it doesn’t feel too bad.”

Ryle exclusively bets his own money, he said. “Many people use their parents’ card when they bet, but I have never used my parents’ money,” Ryle said. “I have always used my own money from either working as a hockey ref or investments in Bitcoin cryptocurrency from several years ago.”

Grace Wilson (12) decided to sports bet for the first time when she attended the Kentucky Derby in May, she said. She bet on one of the horses at the show, Epicenter, “showing” at the race, which meant that she would win money if he finished first, second, or third.

Because Epicenter came in second, Wilson profited — she placed a bet of $21 and won $45 at the end of the show, amounting to a $24 profit. “I wouldn’t say I’m super into sports betting,” Wilson said. “I bet for the first because I thought it would just be a fun thing to do and literally everyone there was betting.”

Although Wilson enjoyed her experience of sports betting, she does not plan to regularly engage in the activity, she said. “I think I’ll only continue to bet at major sporting events that really promote betting like horse racing,” she said. “I really have no interest in betting on random stats like I know some others are. For me, it was definitely more a social thing than an attempt to make money.”

Overall she enjoyed her experience betting at the Kentucky Derby, even though she does not plan to become an active bettor, she said. “I definitely had the ideal experience — I was there with my mom’s coworkers and their significant others, and two of the men offered to take me to place bets because they had been doing so for years,” she said. “They both used their own money so I knew no matter what, I wasn’t losing anything.” Although Wilson tried to pay the men back when she won the bet, both of them declined.

In contrast, JP Eliopoulos (12) does not engage in sports betting because he is not yet 18, so even if he wanted to bet online, he would have to create an account under the name of one of his parents, who  would not approve of him gambling, he said. “Lots of parents don’t care, but mine would.”

Instead, Eliopoulos enjoys fantasy sports, which are different from sports betting, he said. “Instead of winning money, the winner of our fantasy football league gets to pick the day when the loser has to do their punishment,” he said. “This year, the loser of our league’s punishment was that they had to wear a funny outfit to school for a day.”

While Ryle enjoys sports betting, he also recognizes that the activity has its disadvantages which makes it controversial, he said. According to SIT news, only about three to five percent of sports bettors are profitable in the long run. “Even though I have found a lot of success, for the people who may not know how to go about it or may be a little worried, that’s definitely the biggest thing because no one wants to lose a bunch of money,” Ryle said. “I think the biggest thing is being strategic because if you go about sports betting randomly, then the chances you lose are even higher, but if you are strategic and really know your stuff, then there’s a decent chance you can succeed.”

According to the New York Times, about one percent of American adults have a gambling disorder, causing them to continue to gamble despite knowledge of potential consequences. Moreover, due to the recent opening of virtual gambling, individuals are more at risk of developing an addiction since accessibility to the activity has increased.

Gambling, like many activities, is not in itself benign or harmful, Director of Counseling & Guidance Dr. Daniel Rothstein said. “Gambling becomes a problem when a person starts to crave the excitement that can come from making a bet in a way that either is taking up a lot of their time or a lot of their money,” he said. “It all depends on the person and how it impacts their life whether it is a problem or not.”

According to an article on Web MD, gambling, like other activities that allow an individual to experience a ‘rush,’ floods their brain with the neurotransmitter dopamine, which plays a significant role in addictions. Gambling provides an individual with a far greater rush than other activities, and as a result, encourages a person to continue gambling to continue feeling upbeat and high. However, once a person becomes addicted, their brain stops producing dopamine, which furthers an addiction since people keep gambling in an attempt to recreate the initial high.

Ryle has experienced greatly fluctuating emotions as a result of sports betting, he said. “The emotions range from happiness to a lot of sadness to a lot of happiness again,” Ryle said. “Obviously it depends on whether you win or lose, but even when watching a game with a bet on the line is stressful, I generally end up being in a good mood which makes watching a game pretty nice.”

Like Ryle, Tristan enjoys sports betting because it heightens the experience of watching sports, he said. “You just have more invested in a game that you might otherwise not care that much about,” he said. “It’s honestly just a lot of fun to sports bet and a lot of the time that offsets the money that you are likely to lose. It’s really just exhilarating.”

Although Eliopoulos does not engage in sports betting himself, he also enjoys games more when someone he knows has a bet on the line, he said. “It makes me feel more invested in the outcome of a game I might have not cared about otherwise,” Eliopoulos said.

Gambling is not legal in most states for those under 18, but many teenagers are exposed to fantasy sports which can lead to betting and sports gambling, Rothstein said. As a result, teenagers are at risk of addiction. “If a person were to say, I will wager five dollars and that is all I can spend, then loses the money, and, rather than stopping there, tries to borrow more money from a friend, or asks for an I.O.U., or takes money from parents, then they have a problem,” he said. “Just like with social media apps, which are designed with each ping to give a little dopamine rush, the gambling industry puts a lot of effort into hooking people in.”

Ryle enjoys sports betting because he enjoys the overall experience, not just profiting, he said. He places bets on most of the games that he watches, using online platforms like FanDuel and DraftKings. “I know some people are worried about wasting time by betting and then losing, but if you genuinely enjoy sports, then watching games is a lot of fun when you can win money,” he said. “It really just gives you something to look forward to, and even if you lose at the end, if you actually enjoy sports like I do, it’s not a waste of time. It’s more like I’m doing something that I enjoy and there’s the added bonus of profiting.”