Faculty Farewells: After 20 years, Epstein leaves on a high note 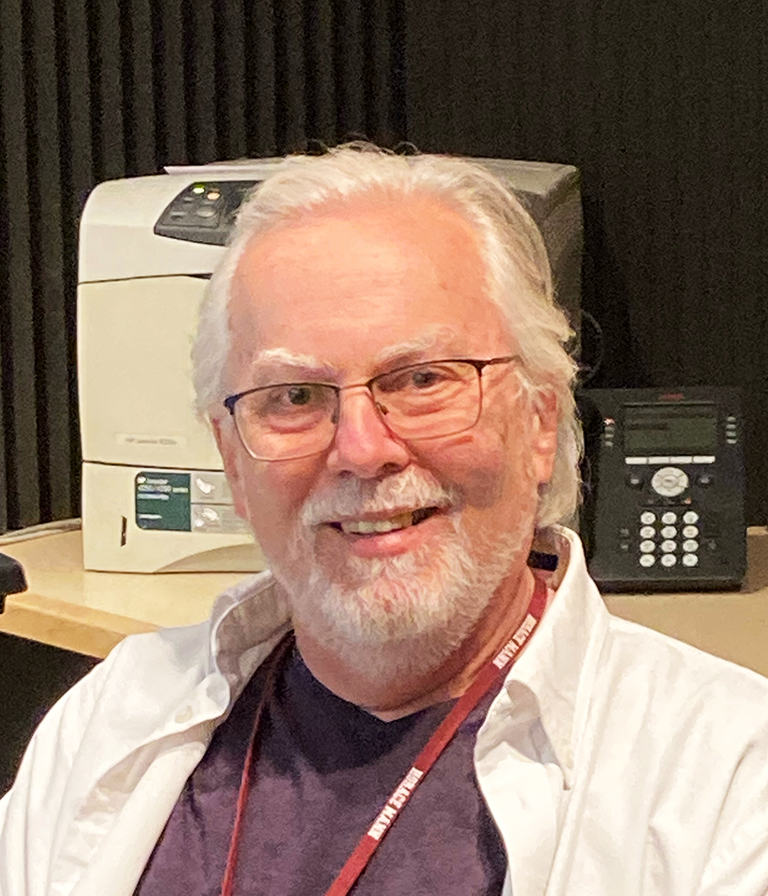 “As tired as I am at 5:30 in the morning, when I get up, I know that by the time I’m in a class, the energy coming off of the kids is just going to lighten my day up,” Music teacher Doug Epstein said. Doug has been working at the school for over two decades and will be retiring at the end of this year.

Doug was hired by the school in 1999 as a consultant to build the recording studio. But in 2012, Doug decided he wanted to teach. He knew how important early years in music are for students, because getting a good foundation is key to a music career, he said. “I also felt an obligation to pass along 35 years of knowledge of how recording music works.” Now, Doug enjoys learning from students just as much as they learn from him, he said.

Before coming to the school, Doug was a recording engineer and producer. “I worked in the real music business out there in the world doing records, jingles, jazz records, and all kinds of really interesting things,” he said.

He switched from producing music to teaching about music also because he wanted to be more involved with education, he said. He has now worked as a music teacher at the school for ten years. “I get a lot out of working with the kids because I am exposed to more music than I would ordinarily be listening to on my own,” he said.

Doug cherishes the memories that remind him of his students’ passions — once, when his students were creating music for his class, he heard smashing sounds on the keyboard and realized how focused the kids were on their work, he said. “I didn’t hear what they were doing because they were wearing headphones, but just the sound of their fingers on the keys with energy, focus, drive, and determination was so exciting.”

Doug made Julia Grant (12) realize she wants to go into the music business, she said. After taking Doug’s Music Theory and Recording Studio Technology classes, his passion and care for his students made Grant want to take his 400 level Music Theory and Composition class, Grant said. “As I progressed through high school and kept taking his classes, I was so passionate about it, and I owe that all to Mr. Epstein,” she said.

Next year, Grant will attend USC for music business. “I would not have chosen that route and I would not have even applied to that music program or any music program if it weren’t for him,” she said. “We share experiences, colleagues, and stories in a way that leads to a richer understanding of the other person.”

An example of Doug dedication was when Grant could not grasp a topic in her class, and Doug offered to meet with her for two consecutive periods, she said. “I know very few teachers who would take an hour and a half out of their day to teach me something.”

Moreover, Doug works in a unique environment because his son Science teacher George Epstein works alongside him. Because work is a prominent part of their lives, working at the same institution has strengthened their relationship, George wrote. Although they do not work together, George likes working at the same institution as his father because they play off of each other’s strengths, he wrote.  When he does a demonstration to his physics classes about waves and sound, Doug loans George specialized audio equipment and provides guidance, he wrote.

George’s favorite moments from working with his father are from Music Week, he wrote. In the past, the duo has played for full-period sets under their stage name, “Wholly Ghost,” with George singing and Doug on guitar and vocals. This year, they did a rendition of the Elements Song at the Music Week Assembly.

Music Teacher Nathan Hetherington appreciates how valuable Doug is to the community, he said. “He came in with a lot of wonderful experiences in the professional music world, and he’s been generous enough to share that with the students and with us,” he said, “He’s been a really cool addition [to the department] that we will definitely miss.”

Additionally, Doug brings an enlightening perspective on music, Hetherington said. “He’s done a lot to bring a lot of 20th and 21st century ideas into the theory classes and into the department,” he said.

Students have learned valuable skills in Epstien’s class, Hetherington said. “A lot of students have had their first recording studio experience in Mr. Epstein’s class, and they have really fallen in love with that whole process, those tools, and that way of making music.”

Brett Karpf (12), who was in Doug advisory and took his Music Theory class, will miss how relaxed Doug’s classes were, he said. “While you’re expected to contribute and create music, there aren’t lofty pressures that are placed on you.” As an advisor, Doug was always willing to listen to his students and offer advice, Karpf said.

In addition to Doug’s teaching style, Karpf is amazed at how much knowledge Doug has about music, he said. “He’s one of the smartest and most bright teachers at the school in terms of his understanding of musical history and music theory,” he said.

When Karpf’s class spent weeks creating songs, Doug created one in seconds, he said. “We were like, ‘Hey, can we see an example,’ and he, within seconds, would make three minute songs that were ready to be released to the public as actual songs,” he said.

Karpf is grateful for a musical artist that Doug introduced him to, he said. Doug has alarms that are songs at the end of every class to keep track of time, and the alarm for Karpf’s class is Good Vibrations by Beach Boys, which is now one of his favorite bands, he said.

For Grant, Doug created a space where anyone who likes music can come together and enjoy it, she said. “One summer, I took a college course in music technology, and I missed Mr. Epstein’s teaching because he was so much more fun, and so much more hands-on,” she said.

Doug will miss his students and his time at the school, but he is ready to change pace, he said. With the newfound freedom of retirement, he is planning to begin writing his own music. Though he received his BA in music theory and composition, he has only recently decided he has the power and stories to write his own work. “I became an artist helping other people with their music as a recording engineer and producer, but at this stage in my life, I have a lot of stories to tell, so I’m going to be writing music,” Doug said.

Although Doug is not certain of what style his music will be in or what it will sound like, he knows that he wants to put his energy into writing music. “I’m looking forward to two big things,” he said. “One is not having an alarm clock pretty much ever again, and the other is being able to write.”