Behind the scenes: A look into the six month schedule-making process for the UD 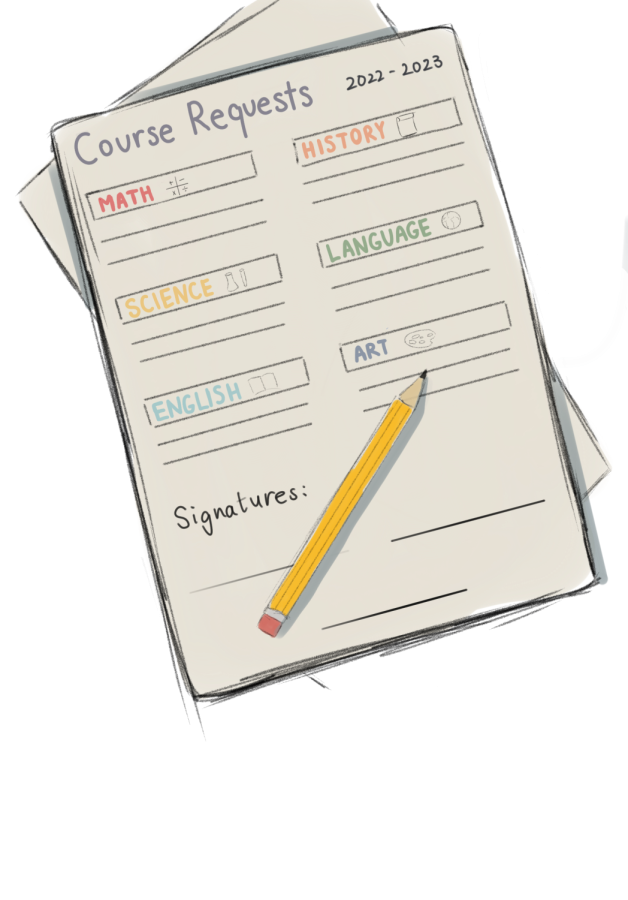 Schedule making is like Tetris, Dean of the Class of 2023 Chidi Asoluka said  “It feels like a game or puzzle of getting everything to align perfectly,” he said.

In the six months before August, when students receive their schedules each year, the Upper Division (UD) faculty and staff work hard to plan courses and make schedules.

The process begins in February, when each academic department finalizes a list of courses they want to offer in the upcoming school year, as well as who will teach them, Asoluka said. The departments then propose these courses to the Committee on Instruction to be approved. The committee has sixteen members: one representative from each department, two elected faculty members, Dean of Faculty Dr. Andrew Fippinger, Dean of Students Michael Dalo, an ICIE representative, and the Community Council (CC) chairs, he said.

Director of the Office of the Registrar Chris Garrison then creates a Program of Studies and sends it to the printer in March. Students begin to plan their courses once they receive the Program of Studies in April, a process that involves their deans, advisors, teachers, parents, and friends, Asoluka said.

Amaris Christian (10) met with teachers in the subjects she was most interested in to figure out what classes would best suit her. “I chose classes that I thought I’d enjoy but would also challenge me and teach me something new,” she said.

Lane also met with teachers of specific subjects he was interested in to figure out whether to take a 300 or 400 level course, he said. “Planning for junior year ended up being a lot of planning for senior year as well to figure out how to spread out my credits and classes I want to take.”

Dean of the Class of 2024 Stephanie Feigin’s favorite part of schedule-making is how students can personalize their courses based on their own interests. “The last graduating class was around 172 students, and I guarantee there were 172 entirely different transcripts,” she said. Because juniors and seniors get to choose the majority of their classes, they are responsible for a two-year plan that ensures they will obtain their graduation requirements, Feigin said.

Ellie Campbell (11) dropped history this school year after consulting with older students, and her advisor, Science and Mathematics Teacher Catherine Crowley, she said. “Though I really loved history, I thought it would benefit me to take Molecular Genetics, which I had both prior knowledge about and interest for the future,” she said.

Scheduling works differently for freshmen, Dean of the Class of 2026 Dr. Shalini Sudarsanan said. Garrison, Dalo, and Sudarsanan visited the Middle Division last spring to help rising freshmen complete their long sheets and register for courses using the online registration software. As an incoming dean, Sudarsanan also accompanied and observed Feigin, Asoluka, and Dean of the Class of 2025 Dr. Susan Groppi as they met with the families of new freshmen to determine the best path for their student, even though freshmen get very little choice aside from half-credit courses, she said.

After students choose their courses, they complete a two-part process in May to finalize their course requests, Groppi said. Students first fill out a long sheet to inform deans of their course priorities before registering their courses online.

The online system creates a list of students interested in classes that require departmental approval and sends them to department chairs for discussion, Groppi said. Although the courses’ grade requirements and prerequisites are outlined in the Program of Studies, it is still important that departments go through every student who signs up for higher level classes after grades come out in early June, Feigin said. “It’s not just about if a student will enjoy a course,” she said. “It’s about whether or not they have the bandwidth or the time to deal with the workload.”

In mid-June, Garrison, Fippinger, Head of School Dr. Thomas Kelly, and Head of the Upper Division Dr. Jessica Levenstein meet about which courses will run, Garrison said. “Based on the thousands of individual course requests, accounting for departmental approval, we go through course by course to confirm which classes will run the following year, mostly based on enrollment numbers.” Then, once students are approved for higher level courses, course confirmation sheets are sent out in mid-June.

After compiling this information, Garrison uses a computer software to begin creating the master schedule, he said. Though Garrison considers teachers’ schedules and workload, such as working to avoid teachers from having to teach more than two periods in a row, the computer is primarily programmed to minimize conflict in students’ schedules.

If students, especially juniors and seniors, mostly sign up for classes that only meet during a single period, students often have to give up other courses requests, Asoluka said. The computer does its best to reduce these conflicts. “The horror schedule is when a student wants to take New Community Project, Dance PE, Steel Drums, Math Seminar, and Psych —good luck because they are only limited sections of those classes so you’ll be hard pressed to get that schedule.”

Divya Ponda (12) had a similar experience when signing up for classes for her senior year. “While I wanted to take Economics and Ethics this year, I ended up not getting either, but I understand that it’s really hard to schedule around classes with very few sections.”

On her longsheet, Camila Florencio (11) prioritized classes that would make her happy and excited to learn, she said. “I ranked Treble Choir first because it’s one of my favorite classes and Latin American History second because I want to learn more about the history of my culture,” she said.

Garrison and the deans also try to be sure class sizes are as balanced as possible, he said. “You have the classes like Atlantic World History with fourteen or so sections, so we try to spread them across the school day,” he said. “But sometimes, there will be two sections in one period where one class has five students while the other has sixteen.” The deans also constantly double check to catch size discrepancies that the computer makes, he said.

After finalizing the master calendar, Garrison sends students’ individual schedules to the grade deans around July 4th, Groppi said. Deans spend a week in early July cross-referencing every student’s generated schedule with their longsheet and adjust for priority rankings and teacher disrequests, she said.

Deans also do their best to move around classes so students have frees when they can eat lunch, Asoluka said. “I do my best to keep it humane,” he said.

However, for juniors and seniors especially, the school often values the academic class schedule over making sure students have a lunch period. “If we had a set lunch period like the middle division, it would greatly restrict the elective options of students,” Garrison said. This gives students the option to deal with grab and go lunches or periodic snacks, which they are often happy to do in order to take more of the classes they want, he said.

Sylvie Seo (12) appreciates all the work put into schedule making and understands the difficulties of putting together over 700 individual schedules, she said. “I don’t think I’d change my schedule if I didn’t have a lunch period because it’d mean giving up the classes I care about.”

After a week of intensive schedule-making in July, the deans set aside their work and enjoy summer break. However, events often occur over the summer that result in scheduling adjustments, Groppi said. “Sometimes a teacher retires unexpectedly or an art class moves to a new studio so we can suddenly fit five more kids in it, so the deans come back two weeks before school starts and we go through everything again.”

Finally, after months of behind-the-scenes work, students receive their schedules in late August. Students often compare schedules once they are sent out, which proves an interesting challenge for deans, Feigin said. “I’m not switching your English class so you can be with your friends or have a different teacher,” she said. “But sometimes, a student will come in with a whole proposal of how to move their classes around and they make it work.”

Schedule changes are part of a dean’s job, Asoluka said. “We know the schedules that we have worked so hard to put together may be completely dismantled the week we send them out.”